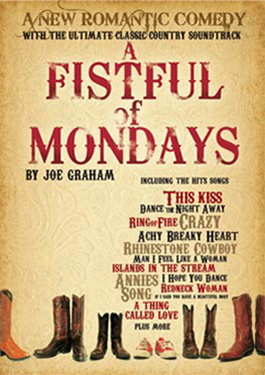 Tom spends his evenings singing karaoke to an empty Walbeswick Sports and Social Club. Not the most exciting existence and hardly making an effort to get back on the social scene since his divorce. His world and that of Steward and bar manager Barry are turned upside down by the arrival of The Monday Night All Star Linedancing Club, using the club as rehearsal space in a vain attempt to drum up more business. Somehow, despite his lack of practise, Tom eventually stumbles his way into a romance with Annie, the dance teacher, but this is soon in trouble as Tom faces his past demons. The linedancing group encounter trouble of their own in the form of a traitor in their midst. Duncan’s love and flair for tap dancing as well as linedancing splits the groups and threatens their future as they prepare for a big linedancing weekend.

“…The audience loved the show and were engaged throughout…” – Daily Information

“A feel-good musical about a line-dancing group has burst onto the Oxford stage brimming with bouncy Country and Western numbers. – Oxford Times, July 2, 2009

“…something special went on in that theatre on that night – it was so hot, the audience was literally melting, but I’ve never seen an audience laugh so readily, or get so involved in a show before..”